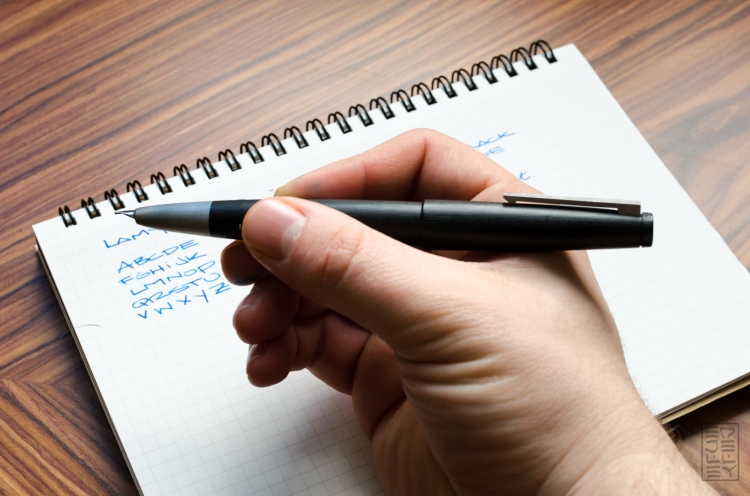 I’ve mentioned throughout the site that the Lamy 2000 is my favorite pen…and well, three years later it still is. The initial excitement over getting the pen has long since worn off. The purpose of these Review Reduxs is to show how a pen has held up over time, if I still enjoy it, how much use it gets, and if I’ve gotten my moneys worth. This is the first entry in an ongoing series, so check back regularly for more extended-use pen reviews!

The 2000 has held up quite well over the last three years. The brushed Makrolon body does a reasonably well job of keeping scratches at bay, but it does show some scuffs. The matte finish has smoothed out a bit, being polished by my hand after constant use. The finish is still very much matte, but if you look at a new pen and a used pen side-by-side, there’s a noticeable difference. 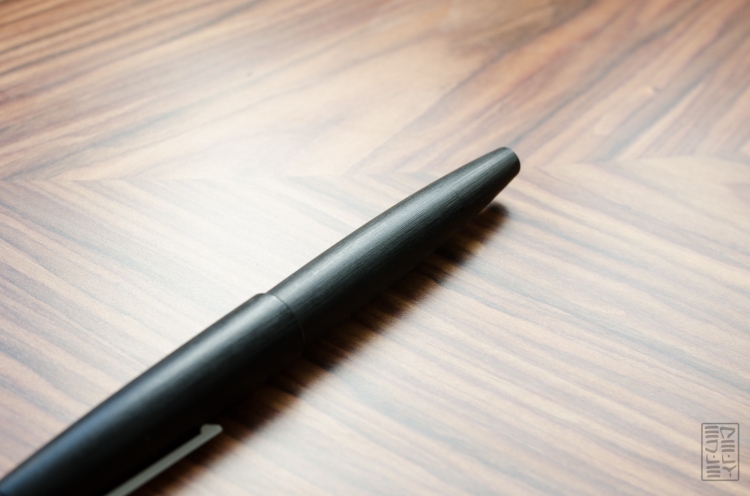 The clip has held up well, still springy as the day I got it. I’m happy with how the 2000’s appearance has aged. It shows some wear, but by no means looks thrashed. I haven’t been overly gentle with the pen, so it’s good to see that something used so regularly can continue to do so for several years.

A common complaint about the Lamy 2000 is the nib. There’s a very apparently sweet spot, which can be easily confused for a scratchy nib. At first, the flow was a bit weak and the sweet spot was very small. I had the pen worked on by Richard Binder at the Long Island Pen Show, the pen is PERFECT. There are plenty of folks out there who work on nibs, so if you’re not happy with yours, it may be worth sending it out. The pen is easy to disassemble, making cleaning and maintenance easy. Every piece of the pen is either fitted with threads or friction-fit (feed/nib into the grip) and everything goes back into place easily.

I’ve greased the piston barrel with a q-tip a few times, and it’s kept the knob turning smoothly with little to no effort. Worth noting, I’ve lost a piece of the pen during a cleaning in the past. There’s a small washer that has the two “ears” that keep the cap on, this piece is small and light, so it’s easily misplaced. A quick email to Lamy’s repair center, and a new one was on the way for $5. The pen is easy to maintain, parts are easily obtainable, and there really hasn’t been any consistent problems with it. The workhorse Lamy 2000 has really lived up to its nickname.

The Lamy 2000 was on of the first pen over $100 I’ve added to my collection. It was a huge step into the hobby, and it’s never an easy purchase decision when making that jump. I was extremely excited when I got the pen, and I can honestly say that I still am. The understated and utilitarian design, solid performance, great reliability, and writing performance result in a daily-use pen that I’m still happy to pick up every time I to write. In the three years I’ve owned the pen, it’s barely gone un-inked. I’m still as excited to use it as I was when I first got it, which I’ve found to be rare in my collection. The Lamy 2000 has been in production since the 1960’s, and it’s gone relatively unchanged. There must be quite a few people out there who feel the same way I do to warrant this, and that’s a great sign.

Does It Hold Up?

Absolutely. The Lamy 2000 is a great value for a solid, dependable workhorse fountain pen. It never gets pushed aside, and for me, it’s almost always in use. Several years later, I’m still just as excited to write with it as when I opened up the package for the first time. I’ve since purchased an all original 1960’s Lamy 2000 and a new Stainless Steel model as well. This particular 2000 was my first, and I doubt it will be my last!

If you like what you’ve read, you can pick up your own Lamy 2000 through this affiliate link. Any purchases made through this link help support the site and they’re much appreciated!