Today we have another guest post by Susan Pigott. You may know her from her own blog, Scribalishess! Her photography, handwriting, and reviewing skills are top notch. If you like what you see here, make sure to go check out more on her site! Here’s Susan’s review of the The Platinum 3776 Century Nice Limited Edition Fountain Pen. Enjoy! 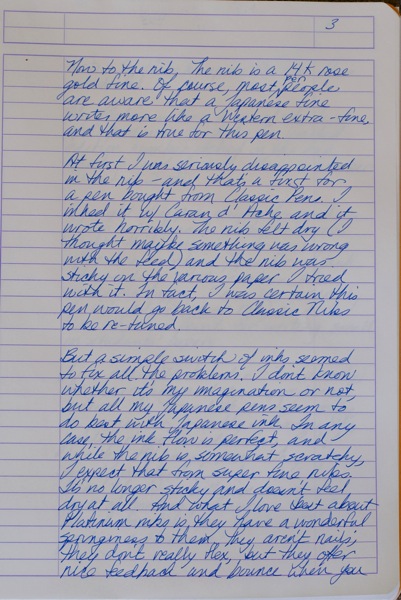 I am not usually one who is interested in clear demonstrator pens. I’ve always felt they were plasticky-looking and sort of silly. Why get a clear pen (and even pay more for it) when you can get a pretty color? But when I saw pictures of the Platinum 3776 Century Nice, I loved it. Somehow the rose gold plated nib and accents on the pen won me over. So, I ordered one from Classic Pens and it arrived yesterday. My Platinum Nice is one of the first 2,000 produced, so it comes with a limited edition number etched on the cap. Mine is 121 out of 2,000. 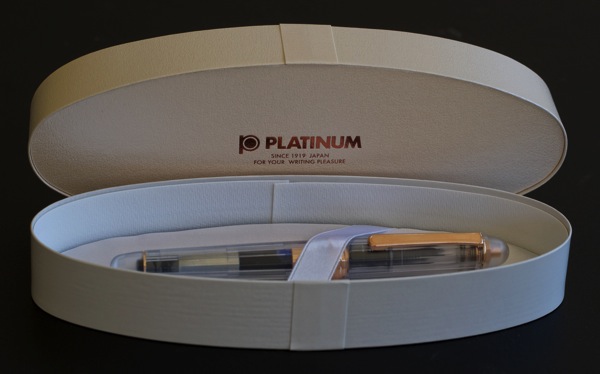 The packaging is nothing spectacular, but it suits the pen. It comes in a cream-colored oval box with a satin-like interior. It’s understated, like the pen. One cartridge of ink and a Platinum converter are included with the pen, along with a registration form, instruction booklet, and information about the Nice.

I was surprised to discover that the pen isn’t clear. It is faceted and has a frosted appearance. I really love this look. The facets give the pen more character than a smooth-bodied pen has, and they add a wonderful elegant shimmer to what might otherwise be a dull finish. The rose gold is simply gorgeous on the pen. I’ve seen it on other pens, such as the 90th anniversary MB. Personally, I don’t like rose gold with a black pen. It just doesn’t work for me. But because the Nice is a neutral color, the rose gold really stands out.

Initially, I was disappointed with my new Platinum fine nib–and that’s a first for a pen bought from Classic Pens. I filled the pen with Caran d’ Ache Delicate Green ink because I knew the green color of the ink would look outstanding with the rose gold (and it did). But when I started writing with the pen, I immediately thought, “I’m going to have to return this and get it tuned again or exchange the fine nib for a medium.” The ink flow was poor, the nib felt dry, and I could barely see the green on the paper. I know Classic Pens tunes their nibs before they ship them, but I thought maybe the nib had some factory oil or something that was making it write poorly. So, I dumped the ink, rinsed the nib, used some pen wash to flush the nib, and rinsed some more. I refilled: same thing–dry, scratchy, stuttering across the paper. I was not happy. This was not at all the experience I’ve had with my other Platinum Century pen. So, I decided to change the ink. I cleaned the pen again and put Iroshizuku Asa-Gao in the Nice. What a difference this made in the performance of the nib! I know that some inks work well with certain nibs and others don’t. Apparently Caran d’ Ache Delicate Green is not good for my Platinum Nice. With Asa-Gao, it writes like a dream. Of course, since a Japanese fine is like a Western extra-fine, the nib has some scratchiness to it. But this is to be expected, and for such a fine line, it writes beautifully. Plus, one thing I love about Platinum nibs is their springiness. They aren’t nails; they don’t flex; but they offer a nice, bouncy feedback as you write.

The filling mechanism on Platinum pens is a cartridge/converter system. I never use cartridges (except on my Kaweco), so I knew I would be using the converter. The converter is tiny, holding only .55 ml. But it has a solid feel to it. I find it easiest to fill the converter directly with ink (rather than trying to fill it through the nib). I get my fingers pretty inky this way, but I always get a better fill. I much prefer piston fillers, but Nakaya and Platinum nibs are so wonderful that I’m willing to put up with the dinky amount of ink the converter holds. One advantage to cartridge/converter pens: they are easy to clean. 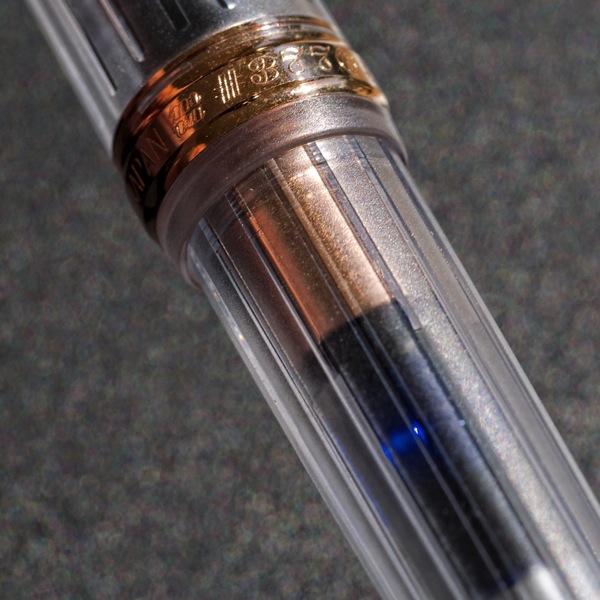 The Platinum Nice is a light pen, weighing in at only .7 ounces (19.9 grams) unfilled. I enjoy writing with both light and heavy pens, but I’ve found that my hand tends to last longer with a lighter pen. The Nice writes well unposted, which is how I use my fountain pens. Posting gives it a little more heft, but the weight is on the back of the pen, so it might feel a bit unbalanced. It’s a good length unposted and fits comfortably in my hand. I wrote four pages in my handwritten review without any fatigue at all using this pen. Plus, I have a Platinum 3776 Century in Chartres blue that I’ve been using for a couple of years as my main grading pen (I’m a professor). It’s my main grading pen for a reason: excellent nib and comfortable writing. The Nice will make a nice companion grading pen with a different color of ink. Unfortunately, I won’t be using the Caran d’ Ache as I planned. Guess I’ll just have to get another bottle of Iroshizuku in green!

I am thrilled with my Platinum 3776 Century Nice fountain pen. It is more beautiful in person than I expected. I love the facets and frosted look of the pen body. And the rose gold is simply lovely. The pen feels solid in my hand, not plasticky. And, once I got the ink problem figured out, it writes like a charm. I realize some might think me crazy for using expensive fountain pens as grading pens. But fountain pens make me happy, and that makes the horrible chore of grading a little less loathsome. A little.